On Saturday, October 15, I volunteered to help raise awareness for suicide prevention. People gathered in the mist at 6:00 a.m. to set up for the Out of the Darkness Chicagoland Community Walk by Grant Park in Chicago. As daylight came, so did the people wearing colorful t-shirts to remember loved ones they lost to suicide. There were 4,300 registered walkers and the event raised more than $700,000 for vital research and programs. 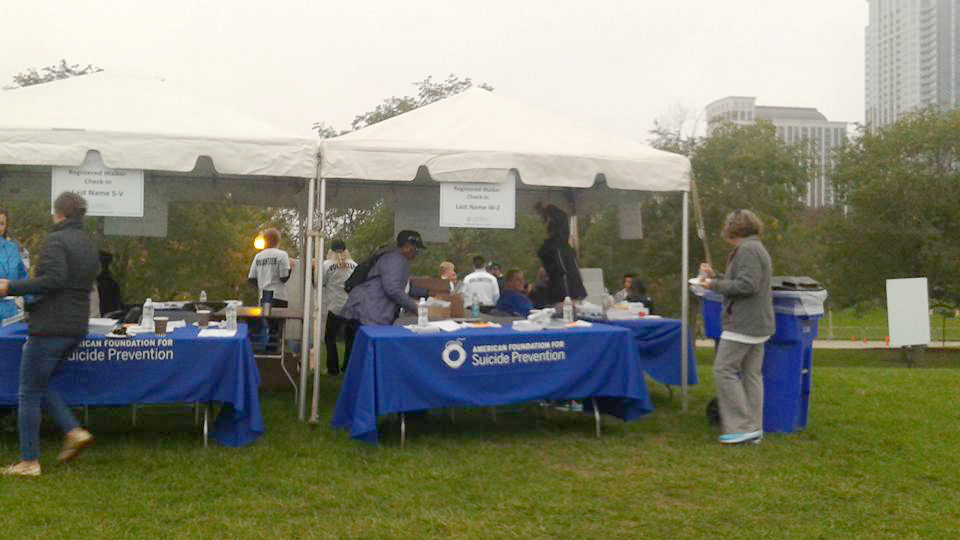 Suicide is a serious public health problem that takes an enormous toll on families, friends, classmates, co-workers, and communities, as well as on our military personnel and veterans.  According to the Centers for Disease Control and Prevention, in 2014–the most recent year for which full data is available–someone in the United States died by suicide every 12.9 minutes. This makes it the 10th leading cause of death for Americans, but unlike many other leading causes, suicide continues to claim more lives each year.

To know the reason for someone’s suicide death is challenging. Research has shown that most people who die by suicide have a potentially treatable mental disorder at the time of their death. The disorder has often gone unrecognized and untreated. What we know about the causes of suicide is lagging behind that of other life-threatening illnesses because the stigma surrounding suicide has limited society’s investment in vital research.

Having heard the stories of volunteers made me realize that even when our lives appear fine from the outside, locked within can be a world of quiet suffering, leading some to the decision to end their life. During his TEDTalk in March 2011, JD Schramm asks us to break the silence surrounding suicide and suicide attempts, and to create much-needed resources to help people trying to fully reclaim their lives after escaping death.

Since its founding in 1987, the American Foundation for Suicide Prevention has connected tens of thousands of people who have lost a family member, loved one or friend to suicide and help them cope. AFSP has reached thousands of individuals who are at risk for suicide, as well as those who love and care for them to make prevention possible. In order to help people understand the facts, AFSP has gained the participation of members of the scientific and clinical communities, who conduct groundbreaking research on suicide and its prevention. To fully achieve its mission, AFSP engages individuals and families, scientists and legislators, and community organizations in essential dialogue to increase awareness, understanding and support for those impacted by suicide.

It is a journey in which everyone must participate because the stories surrounding suicide reflects what’s happening in our homes, our schools and our communities. The more we openly talk about it and listen, the better we can see and act.

To find out more, visit the American Foundation for Suicide Prevention at afsp.org.